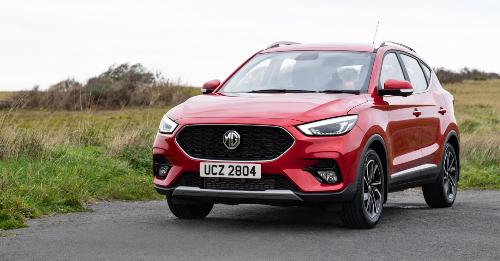 The mid-size SUV competition is best described as crazy in the Indian market, and while MG do have an EV that fits into this segment, the fact that it’s only an EV, puts it in a class of its own, with the price is at par with bigger ICE-engined SUVs. The Chinese-built MG ZS petrol received a facelift in international markets, and this very same model is heading our way shortly. It certainly has the looks to give the competition a scare, but what about its petrol engine? And more than anything, what about the pricing? We analyze what might just be the most well-equipped and value-for-money SUV you could buy in India in the coming months. MG Cars in India hope to offer style, practicality and comfort with their upcoming baby ZS. Let’s take a closer look at one of MG’s new upcoming cars.

In terms of styling, MG Cars have worked on a fresher face, so yes, the grille, the bumper and the headlamps are going to get a fair amount of restyling, to help separate it from its EV sibling. It is undoubtedly cute and has a good amount of chunkiness to the design to help it attain the ‘SUV’ tag. Up-front, it will feature a glossy black grille, an aggressive-looking bumper and stylish headlights with DRLs incorporated. It also features new alloy wheels and projector lights. The wheel arches are flared and we like the raked rear side windows and that roofline that slopes downwards towards the back. It is far from being boxy, and this should help it sell well in India. Expect some vibrant colours to be offered as well. The build quality is sure to be good; maybe even better than the EV, but we’ll have to see if it can match the Koreans for quality.

A breath of fresh air?

Expect a reworked cabin as well, which is sure be a breath of fresh air in its segment. And we won’t be surprised if it betters its competition on this front. It is unlikely to keep up to European levels of fit and finish, but the design is certain to please the beholders while also being well put together. MG Cars are far from being fun to drive, but you might be in for surprise with the upcoming ZS petrol version. It is likely to offer a comfortable ride since the ZS EV does a good job in this department too. However, at higher speeds, you might just feel the thuds come through. When you put your foot down, body roll becomes evident, not inducing confidence in the driver. It also nose dives quite a bit under hard braking, but for comfortable cruising, the ZS should appeal to a wide audience.

The steering is nice and weighty in normal mode, but the ZS will feature Dynamic and Urban settings too. In Dynamic, the steering gets heavy, while Urban results in a lighter feeling at the wheel. This should make it a breeze in urban conditions. The ZE is likely to come powered by two engine options: a 1.5-litre four-cylinder petrol unit and 1.0-litre turbo unit. The bigger engine of the two will come solely with a 5-speed manual transmission with power being sent to the front wheels, while the smaller engine will come with a 6-speed automatic gearbox. The turbo engine is likely to be the peppier of the two, making over-taking easy. However, the MG ZS EV will still be quicker in terms of acceleration times, thanks to the torque provided by its electric motor. The ZS petrol is one among the only new upcoming cars from MG.

Why Do People Prefer Manual Transmission Over Automatic...

The Choice Between Budget and Premium Car Tyres

Global Industrial Vehicles Market is projected to be...