Differentiating B40, M40 and T40 Income Groups in Malaysia 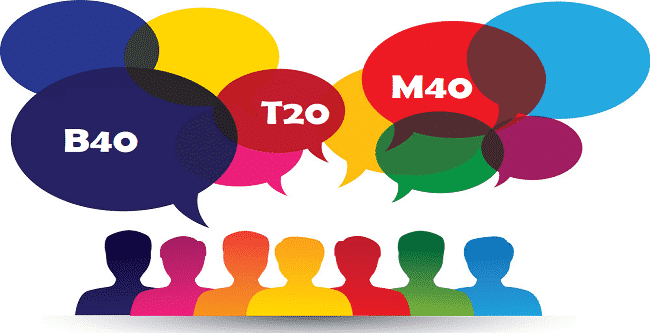 If you’ve been a Malaysian at home this past pandemic, you might’ve heard of the “B40”, “M40” and “T20” income groups frequently during announcement regarding the finances of the country and the people.

Not a term that we’ve been used to at most, it can come as unfamiliar for most who are just coming out into the “adulting” scene. So, what do they mean? It’s basically just an income group that is used to differentiate the type of income earners in Malaysia.

With previous income thresholds, Malaysians were within B40 if their median household income was RM3,000. An earning of RM6,276 were considered M40 while RM13,149 lands you in T20; in 2019, these income classifications were revised to reflect inflation, rising cost of living and household size etc.

So, where do you land in the classification today? What are the chances of you being able to jump from one socio-economic group to the other?

According to the Khazanah Research Institute, a 2016 report suggest that Malaysians have been socially mobile across generations born between 1945/1960 and 1975/1990.

The widening income gaps across the years

For starters, Khazanah has also stated that the household income in Malaysia has increased from 1970 to 2018. How positive is this though? Malaysia’s Gini coefficient (a measurement used to represent income inequality – a higher number means that the income gap is larger) fell from 0.513 to 0.399.

This shows that the household income has risen while income inequality has went down.

The reason to why we still complain about not having enough is simply due to the relative gap and absolute gap:

Because of this absolute gap in earning differences, it doesn’t feel like inequality has improved at all.

When the Covid-19 pandemic hit home last year, Malaysia had one in three employees reported a salary deduction of more than 30% while unemployment rate stands at 4.6% in April 2021, higher than the 5.3% of May 2020.

The various movement control orders didn’t help with this at all as unemployment rates are expected to rise again; B40 and M40 households will also be more vulnerable to loss of employment when compared with T20 households.

Many Malaysians in the area also being forced to move into lower categories, that much that it has even forced Prime Minister Muhyiddin Yassin into contemplating an expansion of B40 into a B50 category. 10% of the T20 group has also slid into becoming middle-income earners.

The Economic Action Council (EAC) also announced that 600,000 of M40 households, or 8% of Malaysian households have slipped into the B40 category due to the pandemic.

With more expected to experience the declines, there have been calls to rethink these B40, M40 and T20 classifications altogether at a time where even the most certain is vulnerable to changes big or small.

Is Malaysia a high-income nation?

Malaysia has come a long way historically in the growth of its economy ever since switching its focus to the agricultural sector and then being in the industrial sector. To ensure that Malaysians get all the full benefits of becoming a high-income nation, the government needs to ensure that the economy is sustainably driven in order to minimise any possible negative impacts.

The second drawback to becoming a high-income nation is the possible increase in disparity between the low and high-income brackets. This is because of the T20 typically owning more assets, and hence, they tend to grow in wealth as the economy grows. In order to mitigate this, there will need to be proper policies of redistributions in place.

The final and biggest drawback to becoming a high-income nation is the reduced quality of life. As the Malaysian government gears the society towards achieving economic growth, the citizens may experience a decline in quality of life, mental health, and physical health. As the citizens of Malaysia maximise their working hours, they may reduce their physical activities and increase unhealthy eating habits, which when combined makes for the worst possible health impact.

At vital times such as those of late, it’s important to make the decisions that wouldn’t hurt you in the present or in the future. Those within the B40 group are often to be most concerned over long-term debt from various loans. Added with recent struggles, this puts many beyond the reach of affordable options.

Industry experts suggest that long-term loans could be the future and the ultimate key to relieving this financial pressure from those who are vulnerable to financial disasters.

Finsource Solution offers five different loans tailored to your needs with financing tenures of up to 10 years.

With a clean loan, property loan, 2 in 1 financing, gap financing and invoice financing suited to meet your financial needs, our loan advisors are ready for your questions 24/7, contact us today to learn more about how we can be of assistance to you!

The most important FAQs about wave curtains

Living in Pakistan Why Solar Power Would Benefit You

Global Amphibious Vehicle Market To Be Driven By...

8 Benefits of Outsourcing Your LPO Services From...